What is Ransomware and how does it work?

Ransomware is a sort of malware that prevents users from accessing their computers until they pay a ransom in the form of untraceable Bitcoin.

It accomplishes this by encrypting a victim's files until the attacker receives the amount demanded.

Ransomware can be spread through a variety of methods, the most common of which being email. One of the most prevalent means of delivery is phishing.

When a user clicks on a malicious attachment in a phishing email that contains ransomware, all of the user's files are encrypted and rendered inaccessible until the ransom demanded in the message is paid.

In other circumstances, the attacker will claim to be a law enforcement organisation that is shutting down the victim's computer because it contains claimed pornography or unlawful software.

They typically refer to the cash they are asking as a "fine" in these circumstances, anticipating that by calling it so, the victim will be less likely to disclose the crime.

This misleading strategy is frequently successful. A criminal threatens to disclose sensitive information on the victim's hard drive unless ransom is paid.

It is paid in the instance of a specific type of ransomware known as "leakware" or "doxware." Obtaining this information, on the other hand, is difficult and normally takes a large amount of time and effort.

Ransomware is a kind of malicious software (malware) that threatens to leak or block access to data or a computer system, generally by encrypting it, unless the victim pays the attacker a ransom amount.......

The User downloads the malicious attachment delivered in phishing.

Ransomware is installed on the victim's computer and encrypts files, making them inaccessible to the user

Victim receives a message from the attackers demanding a ransom payment in exchange for the decryption of locked files.

While ransomware is a major threat to all businesses and organisations, some are more vulnerable to an attack than others.

Medical facilities and government entities, for example, are frequently targeted in ransomware operations since they are more likely to pay the ransom fast because they want instant access to their files.

Small- and medium-sized businesses (SMBS) are fairly common targets for ransomware since attackers know that these organisations often have fewer security personnel and invest less on cyber security.

Ransomware is a common threat to small businesses, according to 85% of MSPs, and 29% of small firms have encountered with it, making them more likely to be unprepared for it.

According to data, the majority of small firms are unable to recover after an attack, and 60% of small enterprises fail within six months of still being infected with ransomware.

Ransomware is perpetually developing, with advanced new strains appearing all the time. While each new variant has its own set of traits and spreading methods, all ransomware strains use the same social engineering techniques to fool the people and encrypt their files. The following are some well-known ransomware variants:

WannaCry : This cryptoworm has affected approximately 125,000 companies in over 150 countries. It made it the most notorious and well-known ransomware version on the planet. 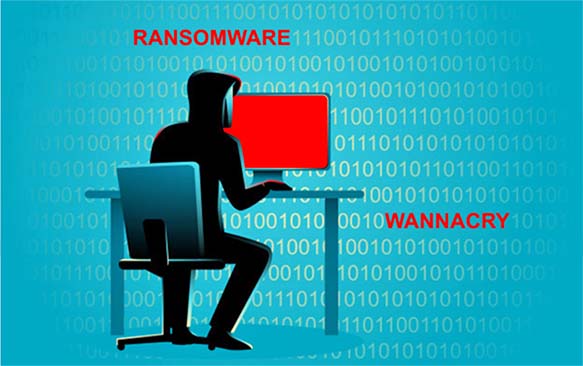 CryptoLocker infected approximately 250,000 devices. It earned over $3 million for its developers between September and December 2013, before being taken down in an international operation in 2014.

Petya: In March 2016, this ransomware strain began spreading in an email disguised as a resume from a job seeker.

If a user opens a malicious file contained in this email, his or her computer will be rebooted. After restarting the system user's files will be inaccessible until the ransom is paid.

Petya encrypts.exe files, making it difficult for victims to pay the ransom in some situations.

NotPetya: It is similar to Petya ransomware. NotPetya encrypts a victim's master file table and demands a Bitcoin ransom to restore access to these files.

NotPetya, on the other hand, differs from Petya in a number of respects, making it more harmful.

NotPetya is a type of ransomware that spreads on its own, encrypts everything on a victim's computer, and is not technically ransomware.

NotPetya causes irreversible damage to a user's data while encrypting it. FedEx lost $300 million in business and cleanup costs in 2017 due to a severe NotPetya outbreak.

Bad Rabbit: This ransomware is usually propagated via a false Adobe Flash update on malicious sites. Organizations in Russia and Eastern Europe have been largely infected.

Cerber: This ransomware strain targets Microsoft Office 365 subscribers that use the cloud.

The importance of secondary protection in keeping Office 365 users and their data safe cannot be underestimated.

Locky: A ransomware version that locks victims' computers until a ransom is paid. Locky spreads via an email that appears to be an invoice.

The Future of Ransomware: Mobile Ransomware and RaaS

What does ransomware have in store for the future? The possibility for ransomware writers and operators to profit from their criminal behaviour is driving fast innovation, culminating in the employment of increasingly sophisticated and inventive approaches.

Threat hackers are motivated by the fact that it only takes a small fraction of successful large-scale attacks to generate significant cash.

According to research released by the National Cyber Security Centre (NCSC) and the National Crime Agency (NCA), new ransomware threats such as ransomware-as-a-service (RaaS) and mobile ransomware are on the rise.

On the dark web, ransomware-as-a-service schemes are predicted to grow more common and harmful in the future years, allowing individuals and organisations to have an impact disproportionate to their technical skills.

Mobile ransomware is on the rise because mobile phones generally lack proper security measures and carry valuable information. Security experts expect that the number of mobile ransomware assaults, as well as the size of these operations, will continue to rise.

While it is impossible to completely prevent a successful intrusion. But following security best practices and investing in a proactive, fully managed email security system can significantly lower your risk.

The following are some best practices for avoiding a ransomware attack:

How to Prevent Ransomware Attacks on Backups

What to do if your computer has been infected with Ransomware:

You'll need to restore control of your computer if you're the victim of a ransomware attack. This, however, will not decrypt your files.

Without access to the key held by the attacker, it is impossible to decrypt blocked files with the majority of ransomware variants.

Also, be cautious! You eliminate the chance of recovering encrypted files by paying the ransom by deleting the ransomware from your system.

Should I pay the ransom?

Victims should always seek the advice of security professionals before paying the ransom demanded by attackers. It is often possible to recover encrypted data without having to pay a hacker.

No More Ransomware is a website that evaluates your encrypted files after you've been hacked to help you figure out what form of ransomware was employed.

They also include an index of a big list of ransomware decryption tools. They also link to where you can find and download the tools you need to decode them.

Many big antivirus companies have comparable pages, and as part of the services, they give to their clients like Guardian Digital, Kaspersky and Quick heal to assist you with this procedure.

Decryption tools may not be available in cases involving newer or less popular ransomware variants.

Paying the ransom demanded by attackers is typically impossible for enterprises and organisations that have lost crucial data.

In fact, deciding whether or not to pay a ransom to restore encrypted information is a hard choice to make: it is both a moral and a practical one that frequently requires a cost-benefit analysis.

The FBI's view on how to act with a ransomware attack was unclear. “We routinely urge folks just to pay the ransom,” an FBI agent told a computer security conference in Boston in 2015.

The FBI then clarified their position, saying that ransomware victims should never pay attackers a ransom.

They further added that paying a ransom does not guarantee that encrypted files would be retrieved and that payments could be used to increase the risk of complications in criminal activity.

When it comes to ransomware, prevention is far better than cure.

Putting in place the kind of email security required to fend off these more sophisticated attacks is an investment that continues to pay off in terms of business security and success.

You should use some top tech Anti Virus software to protect your business from phishing, ransomware, and other complex modern threats.

These are Guardian, Kaspersky, Quckheal etc.